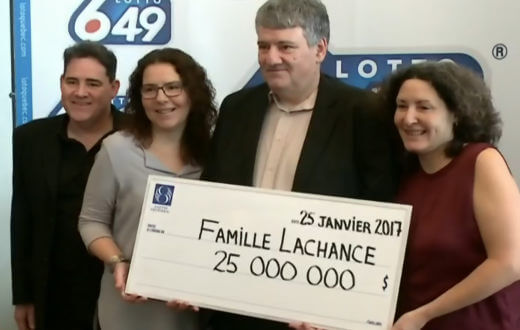 Many of us keep complaining about not having won anything substantial after years of lottery play. This, even as we are only too aware of the long odds of winning big prizes. But a man named Marc Lachance is both patient and persistent. He kept playing for almost 35 years till he managed to score a big jackpot. His reward is a lottery jackpot to the tune of $25,000,000. Since he is Canadian, the prize is not subject to tax!

Just Who is Marc Lachance?

Marc is one of four siblings in the Canadian province of Quebec. He is a brother to Alain, Christine, and Genevieve. He grew up together with his siblings, but now they live apart from each other, in different parts of Quebec. Although, they lived apart, the siblings were very close. The winner currently lives with and takes care of his mother in a house in Gatineau. This means his brother and two sisters come around for visits regularly. At the time of his win, Marc was unemployed.

His name is French and translates as “the luck” in English. Perhaps that is the reason why he plays the lottery – to have a chance at incredible riches he would otherwise find hard to earn. In fact, Marc has been playing the lottery since he was a young man of about 20. Never giving up even when he did not win any significant amount for more than three decades.

Why He Deserved To Win

So why did Marc win? Why wasn’t it one of us? There is no definite answer to that question but we can say that he richly deserved his win.

For starters, he never gave up the hope of winning and kept playing for a long time. Perhaps he even thought of lottery play as a sort of investment in possibilities – something that paid off big time, at least in his case.

Then there is his devotion to his mother, whom he takes care of at their home in Gatineau. For that alone he deserves any reward you can think of. But then there is also his generosity. He has always said that if he wins big, he will share it with this siblings.

Marc bought a ticket for the Jan. 21 draw of the Canadian 6/49 lottery at a Couche-Tard at 882 Boulevard Saint-René West in Gatineau. The like most of us, he promptly forgot about it.

When his sister Christine turned up to visit their mother, she joked that he better check his tickets because he may have won the jackpot. She even said to tell her right away so she can immediately find someone to replace her at work.

When she left, Marc was stunned to discover that all the numbers on his ticket matched those selected in the Jan.21 draw. Even more surprising is the amount of the jackpot – all of $25 million. He immediately called up his sister Christine whose turn it was to think he was joking. When she was convinced it was true, she help call up their other two siblings. And Marc lived up to his word by sharing the prize with them. In fact, all four of them made the claim at the lottery office.

The Couche-Tard outlet shared in the luck too. They were given a bonus of 1% of the prize for selling the winning ticket. That’s a cool $250,000!

So far, only Christine has given an indication of what she wants to do after the win – resign from her job. But one thing is for sure, all of them will be living the good life from here on. Being a really close-knit family makes them all winners anyway. The lottery prize is just icing on the cake.