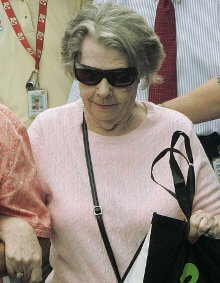 Meant To Be:  A Woman’s Record Powerball Win Dissected

Newspapers were abuzz about the size of a Powerball jackpot that eventually reached $590.5 million before lottery officials announced that the single winning ticket had been sold in Florida. It took a while before a woman named Gloria Mackenzie showed up at the lottery offices to claim the biggest Powerball jackpot ever awarded. The 84-year old widow and retiree did everything right; she took her time, came with her son and two lawyers, and had also reportedly consulted with financial advisors.

Details of her win soon followed. She lived in Zephyrhills, but was originally from East Millinocket, Maine, where two of her four children still live. She shares the jackpot with her son Scott, who also lives in Florida.

She already had four tickets for the drawing when she decided to buy another. She had bought the winning ticket (her fifth entry) at a Publix Supermarket near Tampa, and then added in a statement, that “While in line at Publix, another lottery player was kind enough to let me go ahead of them in line to purchase the winning Quick Pick ticket.”

Gloria’s statement had the newspapers buzzing once again, this time over speculations that a player had missed her chance at the jackpot by letting Gloria jump the queue. The accompanying media frenzy soon identified the “polite people” as Mindy Crandell and her ten-year old daughter.

There has been no statement from the winner that would tend to agree that she had “gained” a jackpot win at the expense of the polite people who let her purchase tickets ahead of them; only that she was thankful to the “gracious people” who gave way to her. For her part Mindy Crandell says maybe Gloria needed it more than they did, and has no regrets since the act taught her daughter a lesson in kindness.

Statistics say that any number combination, even ones in sequence, have as much chance of winning as any other. The computers that generate quick picks do so at random, and resets after every pick. This means that the odds of getting the winning combination of 1 in 175,223,510 do not change with each combination chosen, and whether the choice is made randomly or not.

Tip: You can find cool instructions on how to calculate lottery odds here.

In simpler terms, Mindy had the same chance of getting the same number combination that Gloria got, regardless of whether she placed her bets ahead of or after Gloria did; Mindy’s act of kindness is just that, an act of kindness, no more and no less.

We all have a right to our own opinion. Despite statistical evidence saying Gloria could have won anyway even if she was not allowed to jump the queue, some will continue to believe that Mindy should have won; that no good deed goes unpunished. Some will attribute the win to divine providence, while agnostics will say it is just statistics at play; that someone is bound to win, prayer or not.

Meanwhile Gloria walks away with a one-time lump sum of $370,896,780 to share with son Scott. A recent internet story had someone who looked like Gloria Mackenzie paying for the meals of about 180 people in a restaurant; the “look-alike” said she wasn’t Gloria.

While Mindy and her daughter clearly believe that virtue is its own reward, wouldn’t it be nice to read of Gloria doing something good for them one of these days?