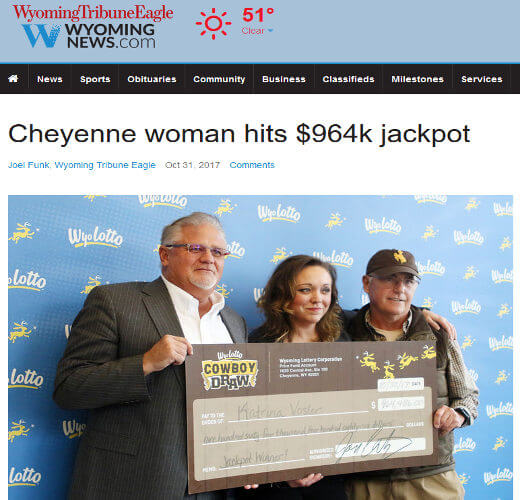 Katrina Vosler was only too happy to spend $100 to $200 a month playing the lottery. One time when she went to visit the Four Winds, a customer of her cleaning business, she bought a ticket thereby mixing business with pleasure.

Then the Wyoming Lottery discovered that a ticket from Cheyenne had won the jackpot and called J.J. Moran, the owner of Four Winds where the winning ticket was sold. They discovered it was Vosler who had won!

Moran tried to ask Vosler to come to the Four Seasons without telling her why, but she won’t have it. But when informed she had won the lottery, she refused to believe it. Then came the moment when the prize amount was revealed. It was more than the $250K she expected – it was $964,486!

The lottery was happy for her, especially since she agreed to be identified as the Cowboy Draw winner. She plans to use her winnings to pay off student loans and to start a retirement fund.

The lottery says the Four Winds will receive a bonus for selling the winning ticket – maybe $1000.