Lucky 50 From Lincolnshire Win £20k Each 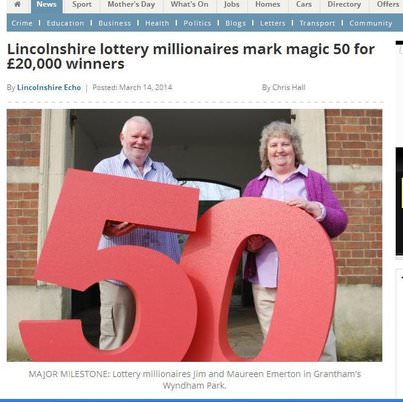 Jim and Maureen Emerton  visited Grantham’s Wyndham Park – to help celebrate the fact that 50 Lincolnshire residents have won £20,000 Lotto Raffle prizes in six months time.  The park had also recently been awarded a £117,000 development grant from the Heritage Lottery Fund and the Big Lottery Fund in January.

The grant was made to have the park restored to its former glory as a World War I memorial.  Kesteven town council will help decide just how the money will be spent.

The Emertons were big winners in 2012 when they snagged a £4.46 million National Lottery jackpot.  They later moved to Lincolnshire.  They said that though they were new to the place, they have grown to love it and the park as well.
Read more in http://www.lincolnshireecho.co.uk/Lincolnshire-lottery-millionaires-mark-magic-50/story-20812101-detail/story.html