Big changes have been announced for the UK Lotto – the biggest the game has seen in it’s 18 year history.

The National Lottery are referring to the changes as ‘exciting’, but many players are far from happy. 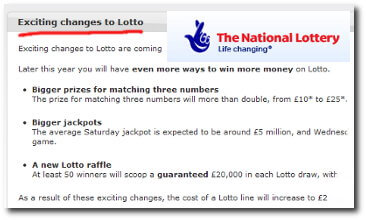 So What Are The Changes Exactly

These are the changes planned for Autumn 2013, and will apply to both the Saturday and Wednesday main UK Lotto game:-

(Note: the use of the word ‘expected’ prize is because winnings of tier 1, 2, 3 and 4 prizes are dependent on sales and number of winners)

So What Do We Have Here

The most significant, and controversial, change of all is clearly the doubling of the ticket price. In part of course to fund the extra prizes for Raffle game, which replaces the Plus 5 add-on game.

This is even more controversial as Plus 5 was an optional extra – the new Raffle is not optional.

So whilst we do have 50 extra prizes of £20,000 that each ticket could win, it will effectively become twice as hard to win all of the other prizes.

Because you will only get half as many tickets for the same money spent.

How About That Jackpot Then?

The potential increase to the jackpot will interest some, and probably those playing in syndicates more so.

But it is a fairly minor improvement particularly when compared to the ticket price increase. And the disappointing reduction in the size of the other big prizes.

Just to be clear – the changes won’t increase the number of other prizes paid out for the Lotto game itself as the structure of that game is not changing.

Camelot say the changes are simply to give lottery players what they have asked for, following ‘extensive’ research.

It’s not easy however to see how the changes really achieve this in any great way. As the only extra prizes here are the 50 prizes from the Raffle game, a total of £1 Million.

The Plus 5 add-on game offered more ways to win for those that wanted it. And it has been paying in excess of 20,000 extra prizes per draw.

Without imposing the extra cost of that game on those that didn’t want to pay extra.

Perhaps Plus 5 was simply a testing ground to see if players would stomach a ticket price increase?

Players Are Not Happy

Players have been quick to make their opinions known, and both Facebook and Twitter are ablaze with comments.

But so far the opinion seems heavily against the price rise.

Particularly on the UK Lotto’s official Facebook page, where they have been inundated with hundreds of comments already.

It’s difficult to find any comments supporting the changes, despite Camelot insistance they are giving players what they wanted.

One Twitter poll puts the figures as high as 80.6% against the change, with players going so far as to suggest a boycott of the game altogether. 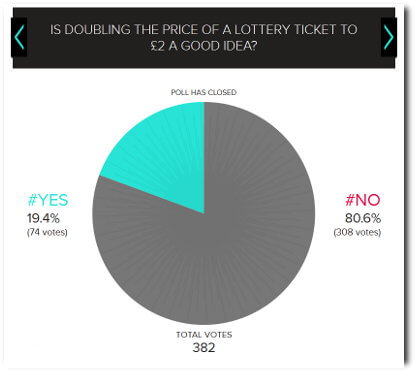 [Poll results thanks to ifyouwereincharge.co.uk and Tim Lovejoy]

Players who feel strongly are already mobilising, with an e-petition against the change already in place and a Facebook group to keep the lottery at £1.

So What Do You Think?

Do these changes give you what you wanted as a player of the UK Lotto?

Will you continue to play as before? Or will you play less combinations and stick to the same budget?

Let us know in the comments section below.