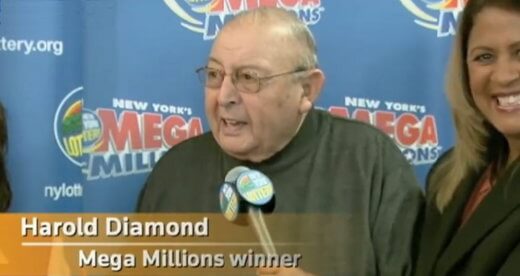 What Makes A Winner?

Until just a few weeks ago, Harold Diamond and his wife Carol were your average retirees. Harold retired as Principal of the George L. Cook Elementary School in Monticello 1995. His wife used to be a math teacher till she retired from Goshen High School in 1994. They shared a home in Wurtsboro, New York and presumably lived simply.

They had no inkling their lives would undergo a major financial upgrade that night in Nov. 4, 2014 when they turned out to vote in the elections. Actually, their plan was to go out to dinner in Middletown after casting their vote; but somehow fate had other, better, plans for them.

The night of the elections, the weather took a turn for the worse. Now Diamond (great name for a jackpot winner) would have gone on to the dinner as they had planned, but his wife had other ideas. Concerned about the bad weather, she suggested, and later had to insist, that they pull up at a gas station to wait it out.

So Diamond stopped over at the Valero gas station on Route 302 in Middletown where they ate a downgraded dinner. Diamond got a bit bored while waiting for the storm to pass and decided to purchase ten Mega Millions tickets from the store clerk, stuck the tickets in his wallet and promptly forgot about it.

But while playing golf the next day, Diamond heard that the winning ticket had been sold at the Valero gas station he bought his entries from. When he checked out his tickets, one of them matched all numbers drawn to scoop the $326 million jackpot; and he was the sole jackpot winner in that draw!

What They Plan To Do Now

When it came time for them to receive their prize, the happy couple chose to receive it in one check instead of 30 annual installments. These people are retired; it does not take a genius to note that few people ever live to more than a hundred these days, so their decision is spot on. They are still set to receive the enormous sum of about $130 million even after taxes.

Diamond and his wife are suddenly wealthy beyond their wildest dreams. The winner says it is still hard for him to imagine the amount of money that basically fell on his lap; after all it is the largest jackpot ever won in the history of the New York Lottery.

For themselves, the couple are planning a trip to Hawaii for their 55th anniversary, which will of course no longer be constrained by finances. They also plan to help out their family and to give back to the local community. They’ll have plenty of time to think about the details while they are on vacation.

What Made Them Win?

Many of us who are still waiting for the big one will wonder what they did to win. If you ask Harold Diamond, he will say the credit belongs to his wife. It was only at his wife’s insistence that they stopped at the gas station that night. The secret is to always listen to your wife, he says 🙂

You can also say that it was the weather which drove them to shelter at the gas station, even though Diamond himself would have preferred to have a proper dinner at Middletown. Or maybe it was their devotion to their civic duty to cast their votes which made them go out that night in the first place.

But then it may not be just devotion to duty, listening to one’s wife and finding the silver lining on the other side of the storm which made them win; what is undeniable is that they had to buy lottery tickets to get the chance to win. They dreamed of landing the big one when they purchased tickets. They were just lottery players like us, dreaming of the time when the lottery will give us the chance to punch way above our weight; the only difference is that their time had come.

It is stories like theirs which continue to fuel our lottery dreams, because the real ‘secret’ to winning is no more than just to keep on playing.

If you’d like a better chance of winning the big US Mega Millions or Powerball give a syndicate a try – such as the new one from LottoLishus, or an old favourite such as WinTrillions. You can play from pretty much anywhere in the world.